Thanks to its recent(ish) acquisition by Disney, the Star Wars brand hasn’t been this strong in decades. The Force Awakens was fantastic, and Rogue One was excellent as well (you can read our thoughts on Rogue One here). For years the Star Wars franchise had stagnated under Lucas, but it is finally back in force (pun intended).

After you are done watching the latest movie, you might have a desire to get some gaming in. There are actually quite a few options for Star Wars gaming and we’ve put together some recommendations for you to check out. To avoid you being stuck playing Star Wars: Monopoly, we’ve only picked out the best options for you to review. So in no particular order, here are some great Star Wars games in a few different categories. 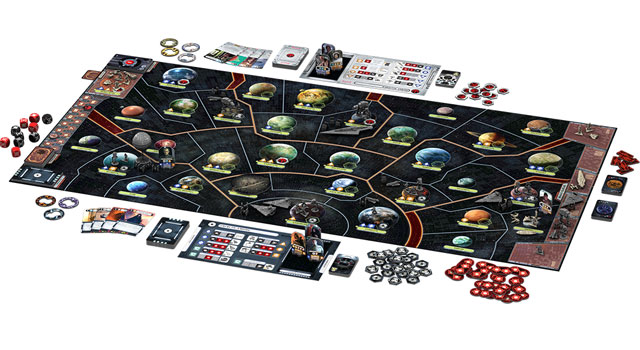 If you are looking for an epic game of interstellar conquest, then look no further than Star Wars: Rebellion. With a play time of about 3-4 hours, Star Wars: Rebellion isn’t for the feint of heart. Yet for those of us looking for an absolutely enthralling Star Wars experience, Rebellion is easily the best. It has a ton of depth to go with its hefty rule book, but its game play more than makes up for the learning curve.

If you are looking for something a bit lighter, check out Star Wars: Destiny. This collectible card/dice game puts two players against each other in a battle against each other. Each player creates a deck using up to two heroes from the Star Wars Universe, with weapons, upgrades and support characters. Think Magic: The Gathering with a star wars spin and dice as a focus. While I’m not usually a big fan of collectible games, Star Wars: Destiny is a blast to play.

While Star Wars: The Phantom Menace was a pretty bad movie, the game based around the climax of that movie is shockingly fun. Star Wars: The Queen’s Gambit boasts a massive amount of miniatures and will have you rolling piles of dice during the game. It’s also a ridiculous amount of fun. The Queen’s Gambit features a fight for control of the game’s four theaters of war…all at the same time. If you can find a copy of this out of print title at a reasonable price…grab it.

This minis game is still in production and regularly getting expansions. Star Wars: Imperial Assault can actually be played in two different ways. If two players just want to get in a quick game, there is skirmish mode where each player builds a squad of heroes and fights it out. You can also play Imperial Assault in campaign mode where up to five players play through a series of linked missions with one player being the Overlord that controls the Empire’s forces. 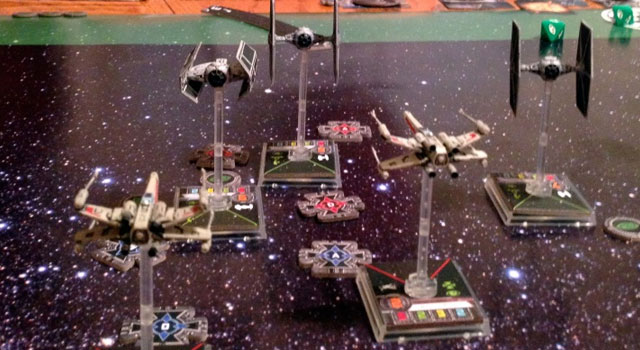 If you’d like to get away from the ground combat and jump into a fighter, then check out Star Wars: X-Wing Miniatures. This tactical minis game has players forming a squadron of fighters and duking it out in the stars. There have been a multitude of ships released for this game, so players will have a plethora of options for customizing their squads before they head into battle. Players can choose ships from the Rebel Alliance, the Empire, or even neutral factions of scum and villainy. 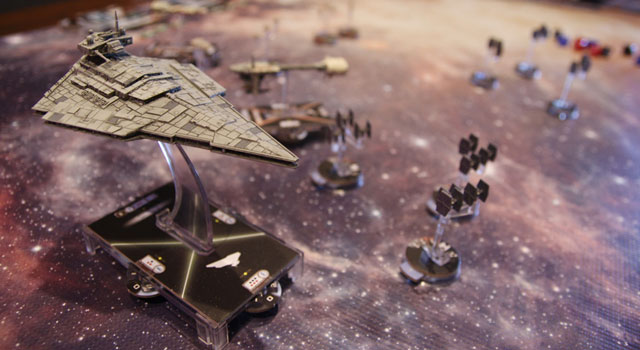 If dog fighting isn’t your thing, then maybe you’d be interested in Star Wars: Armada. It takes the groundwork laid out by the X-wing Miniatures game and gives players a game with more of a strategic feel. In Star Wars: Armada you control capital ships: Star Destroyers, Calamari Cruisers, and even corellian corvettes. In addition to capital ships, players will also control fighter squadrons that can act as fighter screens or harass enemy ships. If you ever dreamed of being the admiral of a star fleet, Star Wars: Armada is a great choice.

To be honest, most of the Star Wars mobile games are crap. There are about 3 games out right now and they are all free-to-play cash grabs. Unless you are the kind of person who enjoys dumping buckets of money into “free-to-play” games that milk you for every dime they can, you are going to want to steer clear of games like Star Wars: Galaxy of Heroes (should be called Galaxy of Grinding) or Star Wars: Force Arena (Clash Royale knock off).

However all is not lost. For the utterly fantastic RPG Star Wars: Knights of the Old Republic is actually available for tablets and its surprisingly good on our mobile devices. If you’ve never played this classic Star Wars title, you owe it to yourself to check this one out. While this game was first published in the early 2000s, Bioware did an amazing job with this title and it has aged really well.

Star Wars: Edge of the Empire

There are actually a few tabletop Star Wars RPGs for you to choose from. Published by Fantasy Flight Games, they are all similar, using the same system for its foundation. So choose the one that has the genre you like the best. Star Wars: Force and Destiny is set during the height of the old republic and will have the players being powerful heroes. Star Wars: Age of Rebellion is set during the time of the rebellion with players actively opposing the empire. And, my favorite, Star Wars: Edge of the Empire takes place on the fringe of the galaxy. This is a good option if you want to play a scoundrel or someone that sees the universe in shades of grey, rather than black and white.

10 Thoughts on No Man’s Sky