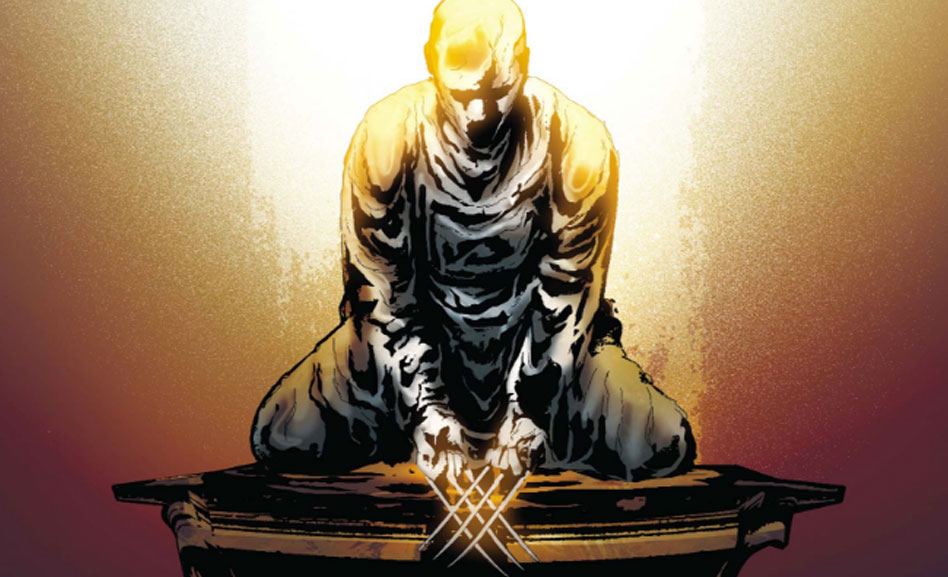 If you read our previous article What Exactly is Marvel Comics Doing?, you’ll know that they are making some pretty drastic and sometimes confusing changes. Iconic characters, some of which have their own movies to go along with decades of stories, have been tossed in the bin and rebooted. And this isn’t like your typical Marvel reboot that just gives you a fresh story without all the baggage. These characters have been DRASTICALLY changed. Races, gender, origins, it’s all up for grab. Is this change for the better? I’ll let you decide on that. So let’s jump into it. Here are five of the biggest changes Marvel Comics has recently made. 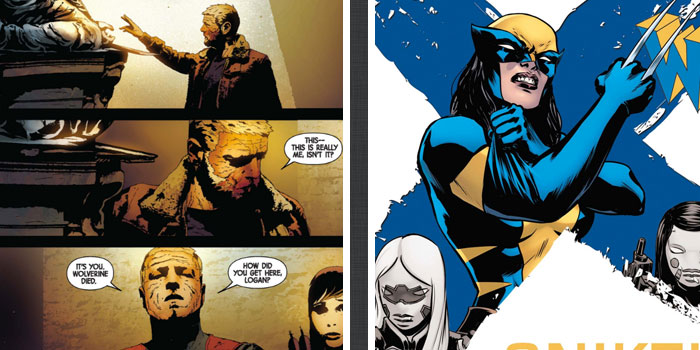 1. Wolverine is Dead, and an Old Man, and also a Woman.

Confused yet? Oh we’re only getting started. Wolverine was killed off by being completely incased in Adamantium. When he died, there was apparently a void left in the name of Wolverine that needed to be filled. So X-23 jumped into that role as the All New Wolverine. If you have seen the recent Sony movie Logan, you might recognize her as Laura, Logan’s daughter/clone.

But that’s not all. Logan is actually back in the Marvel universe, just a whole lot older. He is in a few books actually, including his own called Old Man Logan. Due to the effects of Secret Wars, he came from a reality where all the other super heroes have died. Logan slipped into the current Marvel universe as an old man, who’s skills and healing factor aren’t quite what they used to be. He has since rejoined the X-Man, but has not taken up his Wolverine moniker. The Sony movie Logan share a lot of similarities with this title (see our review here).

2. Spider-Man is both a rich CEO of his own corporation, and also a mixed race teenager.

There are actually two spider-men now. Through a convoluted story arc, Dr. Ock swapped brains with Peter Parker just before Otto died. While he was in control of Parker’s body, he built Parker Industries, a tech corporation that turned Parker into a billionaire. Long story short, Parker eventually regained control of his body and is now back as Spider-Man, and also a CEO of his own multinational corporation.

Yet there is also Spider-Man. Miles Morales is a half-latino, half-african american teenage boy in New York. He took up the mantle after getting bitten by a spider as well, just after Peter Parker died in the Ultimate Comics universe. Eventually, the Secret Wars story arc merged these two universes together so now there are two Spider-Mans (Spider-Men?) running around. 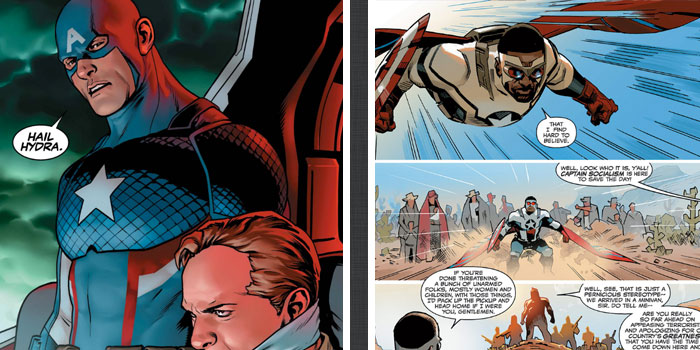 Guess how many Captain America’s are patrolling the streets right now? If you said 2, you are seeing a pattern. Captain America, AKA Steve Rogers was aged into an old man thanks to the Red Skull. Needing someone else to take up the role of Captain America, he tagged in Sam Wilson, AKA Falcon. Sam took Caps shield, but oddly kept the wings (which never sat right with me) and became the all new Captain America.

However, old Steve Rogers didn’t retire. He was still around, instead acting as a team leader/planner. Steve eventually regained his youthful age and body shape, thanks to the will of a living Cosmic Cube (in the form of a little girl). However this girl had also befriended Red Skull, so when she remade Captain American, she also altered his history to make him secretly a Hydra Agent. Rogers is once again Captain America (although so is Sam Wilson), yet has a different shield now…oh and a massive Hydra tattoo on his chest. Subtle right? Hope no one every catches him in the shower… 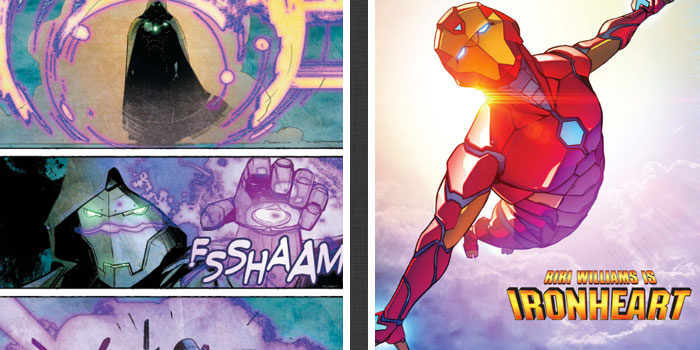 Continuing our run of two characters, Tony Stark has dropped into some kind of coma thanks to the events of Civil War II. While he recovers, his conciseness has been uploaded as an AI. African American teenager Riri Williams is the star of the new Invincible Iron Man series and works with the Stark AI to fight crime. Although her name is technically Iron Heart, she’s basically Iron Man (Iron Woman?)

Meanwhile, over in the Infamous Iron Man, semi-reformed Victor Von Doom has decided to play nice with the other heroes and become his own Iron Man. Apparently after a stint as God (see Secret Wars), Doom had a change of heart. He no longer hides behind a mask and flaunts his pretty boy features. Not surprisingly, the rest of the Marvel heroes haven’t exactly welcomed this ex-villain with open arms. 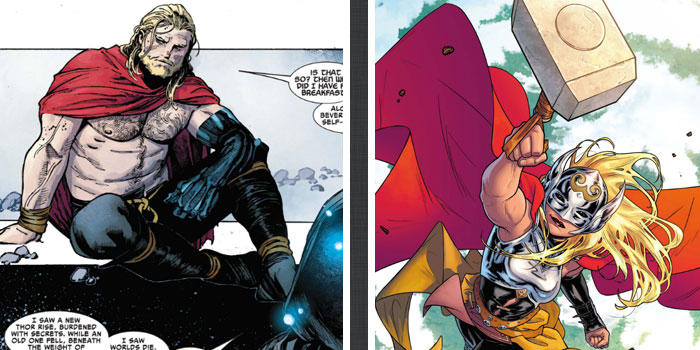 5. Thor is now a woman…and also missing an arm.

And finally we get to Thor…or the Thors I should probably say. As I’m sure you’ve already guessed, there are 2 Thors. Over in The Mighty Thor, Dr. Jane Foster was able to pick up Mjolnir when the original Thor was deemed unworthy due to whatever the Watcher said to him over in Original Sin. Jane lives a double life as a blonde, badass Thor, and a cancer stricken Jane Foster who can barely move.

Yet over in The Unworthy Thor, we have the original Thors (called Odinson) who had an arm cutoff and now has a metal one. He is on a quest to redeem himself and fights bad guys with an axe.

And recently, a 3rd Thor has come to light in the form of War Thor. thoroughly confused by all of this? Welcome to being a Marvel fan in this age…¯\_(ツ)_/¯ 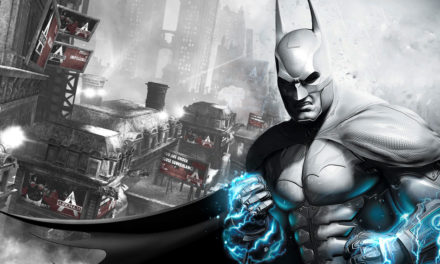 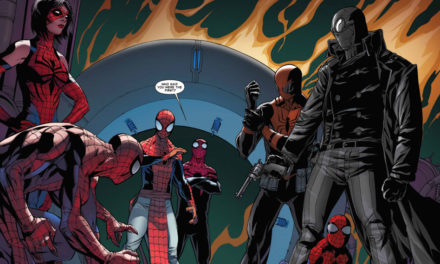 Top 10 Alternate Versions of Spider-Man from the Spider-Verse 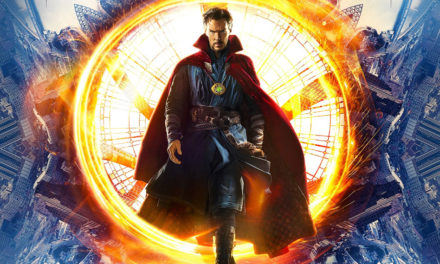