The Grizzled – Game of the Week

One of the hallmarks of a great cooperative board game is just how challenging it is. When you don’t have another player to oppose, the game really needs to ratchet up the difficulty to ensure that clever players can’t just cake walk through it. While not everyone wants to get beat down by the games they play, I only like my cooperative games on the easier side if they are a family style game. And our newest Game of the Week take’s that logic to heart. 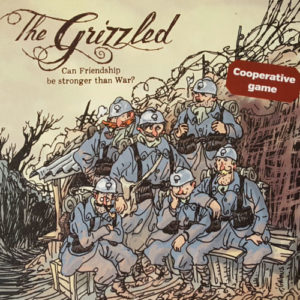 Game designers Fabien Riffaud and Juan Rodriguez partnered up with publisher Cool Mini or Not Games (CMON) to bring us our Game of the Week, The Grizzled. This card game was actually one of CMON’s first games that actually wasn’t a large minis game, and it ended up being a rousing success, with an expansion having already been released.

The Grizzled is a cooperative game where players jump into the combat boots of soldiers during the first World War. Each round, players draw threat cards into their hand. They must then play those cards into the mission, being careful not to play too many matching symbols. If a player can’t or doesn’t’ want to play a card, they can back out and leave the mission. Each card represents either threats (such as poison gas and or severe weather) or negative personality traits. The game ends if the players can play all the cards in the draw deck and their hand. The players lose in several ways (and most likely, quite often).

Why Should You Play it?

For players that love a good challenge in their games, The Grizzled can be a real kick in their teeth. This is not an easy game to win. I think I win one out of every 10 games I play. But I still love it. The artwork in The Grizzled is highly stylized and really fits the theme of the game. On a more serious note, the art was done by French cartoonist Tignous, who was killed in 2015 in the Charlie Hebdo shooting.

The Grizzled is fun, looks great, and even has a low price point. It’s small box also makes it very portable. Combine all those things and you have our newest Game of the Week.