I’m going to tell you a secret. Comic book movies make studios A LOT of money. Shocking right? Joking aside, thanks to the rise of the Marvel Cinematic Studios, comic book fans are in a golden age with their movies. Well maybe not necessarily a golden age, thanks to DC constantly dropping the ball. But things are defiantly better than they were a decade ago. Don’t believe me? Go watch the Punisher movie or Green Lantern. Shudder.

With 2017 finally here, we have a host of comic book adaptions to look forward to. The comic book movie juggernaut is in full force and it shows no sign of slowing down. So with that in mind, I’ve pulled out 10 comic book movies that have caught my attention. While I’m sure not all of them are going to be amazing, they each look interesting in their own right. So let’s get to it.

Not a ton is known about this movie, as trailers are only just now starting to appear. There was a teaser released at comic con last years, but it’s barely worth watching (at least from what I saw of the leaked footage on youtube). Combine that with the fact that I’ve never been that enthralled be the Thor movies in general, and you have my number 10 on this list. The few bits I’ve seen with the Hulk do have me intrigued though. It has almost a Planet Hulk feel to it. But I did post the Thor vacation trailer instead here, go watch it, it’s hilarious.

The 2014 Lego movie caught just about all of us by surprise. I don’t think anyone expected the movie to be as funny or well made as it was. With the success of that movie, Warner Bros has gone all in on the Lego franchise and given the quirky Lego Batman his own solo movie. From the looks of the trailer, It seems that the Lego Batman Movie will build on the magic that made the Lego Movie so great, providing an experience kids and parents can both enjoy.

Frankly, I’d be more excited for this movie if Zack Snyder weren’t attached to it. Almost all of his DC movies have been mediocre at best. Dawn of Justice was a disappointment, as was Suicide Squad. So I’m not sure there is any reason to believe Justice League will be better. That being said, the trailer had it’s moments, but I’ve been burned too many times in the past from DC to get too excited. I’m approaching this one with reserved caution.

Based on the graphic novel of the same name, The Coldest City is a spy thriller set in Berlin during the Cold War. While the comic was great, not a ton is know about the movie yet. No trailers have been released, just some casting announcements. We do know that the movie stars Charlize Theron as an MI6 agent. After her performance in Mad Max: Fury Road, I have high hopes for this one.

Wonder Woman, played by Gal Gadot, was one of the best things to come out of the Dawn of Justice movie (along with Ben Affleck’s Batman). Thankfully, Wonder Woman isn’t being spearheaded by Zach Snyder, and is instead Patty Jenkins. While she doesn’t have a lot of directing credit, she did some really good work on 2003’s Monster. I’m hoping this movie will live up to the hype that’s building for it. It also takes place many years before the current events in the DCU, so it won’t need to relay on anything that’s happened up to this point, allowing it to stand on its own.

Wilson is not your average comic book movie. This isn’t a super hero movie, or even one with lots of flashy special effects. It’s based on the indie comic book by Daniel Clowes. It centers around a socially-awkward, sarcastic, loner name Wilson, played by the amazing Woody Harrelson. Wilson discovers that his long divorced wife gave up the daughter he never knew he had to adoption, and the movie follows his adventures to find her. Just watch the trailer and see if you are not intrigued.

While the Fox super hero movies haven’t exactly thrilled me (except Deadpool), the trailer for Logan has me intrigued. This dark movie seems to be almost a buddy pic between Wolverine (Hugh Jackman) and Professor X (Patrick Stewart). With the bleakness of the world portrayed, and the theme of despair, Logan almost has a Last of Us vibe to it. I’m approaching this one with reserved optimism.

French film director Luc Besson made one of my favorite movies of all time in The Fifth Element. Well just under two decades later he is back at the helm of another space opera in the form of Valerian and the City of a Thousand Planets. It’s hard to explain the premise of Valerian in a few words, but it’s based on the french comic Valerian and Laureline and involves a duo of time and space hoping temporal agents. There are primers available on the web, but everything about this looks to be another space opera blockbuster in the making.

Yes, another Spider-Man Movie. Is this a reboot? Technically I guess it’s the second reboot of the franchise. It’s all new cast was first seen in Captain America: Civil War, and Spider-Man was a scene stealer in the few bits of screen time he has. The trailer for Spider-Man: Homecoming has us really excited as well. When it first debuted, I must have watched it half a dozen times in a row. This is also the first Spider-Man movie not produced by Sony, but by Marvel Studios (thanks to a deal between the two). And Marvel Studios absolutely knows how to make a super hero movie.

Of course Guardians of the Galaxy Vol. 2 is the comic book movie I’m most excited about seeing this year. Guardians of the Galaxy was my #1 MCU movie in my top ten list, so if the sequel is even half as good as the first, I’m going to be very happy. The whole cast is back, the trailer looks great, and the movie seems to have retained the same charm that made the first one so enjoyable. May 5th can’t get here fast enough! 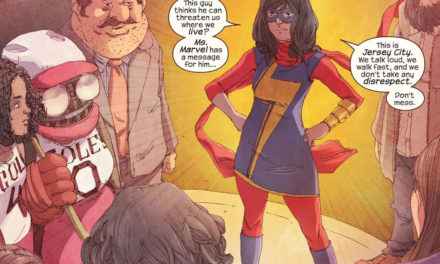